Fasting in Bali …or was it feasting?

An account of naturopathic fasting for 8 days on water, tea and broth.

When I mentioned to friends that I was going to Bali in January to do a water fast, all of them looked at me with bewilderment. “What, and not eat the food?”.

Why? Because I needed to experience water fasting for longer than a day. My naturopathic colleague, Layla Metcalfe and I are running healing and therapeutic fasting retreats, so I needed to have an extended, water fasting experience to have more integral understanding.

Theory and science is one thing, personal experience another.

My first water fast was about 20 years ago. I was an idealistic, new naturopathy university student, fresh from hectic Sydney living, a smoker, drinker of both coffee and alcohol and regularly ate refined carbohydrates and conventionally grown food. I’d read a naturopathic fasting book and wanted to experience the benefits they’d described; the increased vigour, vibrant mind and body, clear skin and so on. I’d done zero preparation and, despite the warning of the naturopath I consulted prior, I bulldozed ahead with my jug of water and a small bottle of liquid herbs.

Within 48 hours I seriously thought I was dying.

I still recall being splayed across my bed with every part of my mind and body reacting; exploding headache, vomiting bile, deep bone aching and so on (read more here). The intense simultaneous withdrawal from nicotine, caffeine, sugar and alcohol was the main culprit, but also a body and mind under resourced to cleanse effective.

How could the simple act of stopping consumption, at 29 years old, knock me so powerfully?

The radical impact that the withdrawal and fasting had on me then inspired my curiosity into fasting, and lead to the development of the 5-Phase Sparkle Wellness and Detox protocol, Sparkle detox retreats and inspired 8 years of writing DIY Detox column for Wellbeing Australia Magazine.

In the last 20 years, the scientific evidence for the profound benefits caused by various methods of fasting has been growing. When we are in the fasting state a coordinated regeneration is stimulated. This includes reducing inflammation, improving immune function, helping the body to ‘eat’ damaged cells (autophagy), benefiting gene expression, increasing stem cell generation, increasing capacity for forming new brain cell connections (increasing brain derived neurotrophic factor), improving the body’s reaction to glucose (insulin sensitivity), weight (fat) loss, as well as case evidence for a long list of chronic health issues from cancer to diabetes and cardiovascular disease.

Interestingly, much of what science is revealing backs up traditional Nature Cure doctors understandings (just saying…)

If only we could put fasting in a pill.

But we can’t (yet). Thus, we headed off the most Easterly point of Bali to a private casa and got to it. Bali is a cheaper alternative to Australia. And warm. And humid. And a tropical paradise.

It was a safe place to overcome my first, horror, water fasting experience. 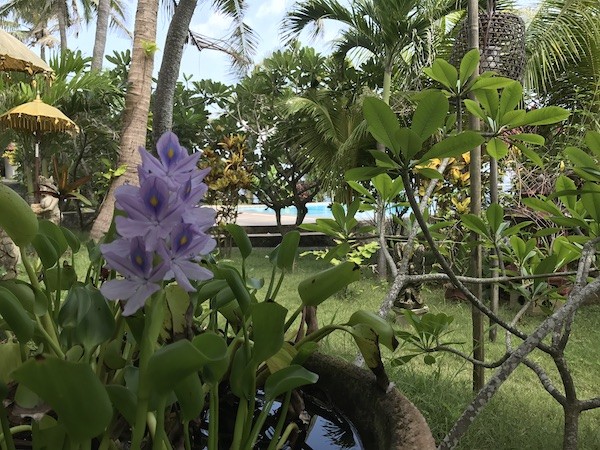 This time I was well prepared.

No longer was I a stress-junkie, party-girl living on caffeine and carbs, and am in good health. Prior to this fast, I’d focused on my hydration, reduced any addictive substances (coffee and wine), increased my fruits and vegetables, and had set some clear intentions on why I was doing what I was doing. Check out Phases One, Two and Three of Sparkle 5-Phases protocol for complete overview of how to prepare.

I’d decided to do a five day water and herb tea fast, with two days of other liquids going in and a day coming out making a total of eight days fasting. After that, a three day re-introduction of foods, slowly increasing in complexity. On reflection, this reintroduction needed to be longer and more structured.

On fast days one, two and seven, I drank mineral vegetable broth as well as water. I had small glasses of jamu, the traditional ginger and turmeric drink (without the sugar) on day one and two. On fast day eight we celebrated with a coconut water with lime (the best ever). And had a little red papaya with fresh lime and salt to break the fast (omg). Later that day, a bowl of which was Indo style, mineral broth with a few boiled cabbage and greens (just so good).

Each morning during the fast, we tested blood ketone and glucose levels, which helped us see that we were physiologically in a fasting state. We also monitored blood pressure and heart rate to ensure we were not doing any harm or endangering ourselves.

Our daily program included some form of yoga, breathing practices and meditation.

Often I’d naturally wake in time to watch the sun rise over the ocean. Bursts of air bathing (walking around naked), sun bathing, swimming, journaling, walking and working all easefully slotted in to the days. I rested. A lot. There were many moments spent watching the butterflies dance across the lush garden. We hired scooters and had little adventures along the coast; white sand beach visit, hanging around the market place sheltering from torrential rains, and enjoyed a sneaky soda and lime at a beachside retreat on day five.

Layla and I combined our naturopathic thinking and had an array of supplements on our kitchen servery counter to use throughout the fast as needed. These included things like:

Sometimes they also fulfilled the desire for a different flavour or texture.

NOTE: Natural Hygienists reading this will be shaking their heads by now, as they are the traditional Nature Cure practitioners of water fasting, which is strictly only water. As a naturopath with an environmental focus, my sense is we need to support fasting physiology with individualised herbs and supplements in 2019, due to the toxin body burden contained in varying degrees, in all living beings on the planet. It’s just not the same world anymore. Apologies in offending any natural hygienists out there. I love your work, and very open to continue the exploration and learn more about water fasting nuances.

Gladly, I had no serious adverse reactions throughout the fast.

There was, of course, moments of tiredness and light headedness, seriously smelly pits, bad breath and a few transitory aches as the process unfolded. But it all passed.

Was there any pooing for 8 days?

There certainly was. In fact, there were a surprising number. In my previous fasting experiences, both personally and running detox retreats, the lack of solid food consumed during fasting means no trigger for the automatic wave through the large intestine (peristalsis) to propel the poo.

However, with water fasting (and supplements), the stools just kept coming. My sense is the good quantities of water we were drinking played a major role. The stools didn’t come necessarily every day nor the same quantity as normal, but there was movement. Thus the enema kits I had brought along, which I employed in previous liquid fasting retreats, stayed in their packages.

How was the hunger managed?

Interestingly, after a few pangs in the early of days, I really didn’t feel much hunger for the first 6 days. For the most part, we weren’t around food smells, or scenes of people eating, which made it easier. Towards the end of the week, hunger appeared more regularly.

I was interested in getting to know hunger better. When the moments of hunger arose, I didn’t shy away from them, as really, it’s not such a common experience in our 3-meals-a-day way of life. So when I was hungry, I named it, watched it, and didn’t hang any stories or give it additional weight. Sometimes I’d wonder, “what am I really hungry for?” Other times, I just let it be, and let it pass. A glass of water was often enough to placate it too.

Sometimes a wave of ‘hangry’ or irritability would arise. And then pass away. Likewise, the feelings of bewilderment on waking, realising there was no need to go to the kitchen to get something. Another hurdle was a boredom of missing the remarkable sensations that food brings.

In the middle phase of the fasting period I witnessed some really ugly thoughts come up; judgements, self-loathing, guilt and others, that made me feel bad, ‘not enough’ and even a bit twisted and embittered. I just stayed with these in their moment of disclosure and discomfort, and accepted they were part of the picture too. Those Vipassana Buddhist meditation practice hours evidently came in handy.

All of it passed. And I let it.

Our casa overlooks the Bali sea, towards Lombok and the far horizons. The gardens are tropical and luscious, and slightly wild and overgrown, dotted with traditional Balinese alters. Alive with birds, butterflies and beetles and adorned with remarkable flowers and leaf formations. Simply being in a space of natural beauty aligns wonderfully with the spaciousness of mind that ketosis imparts. 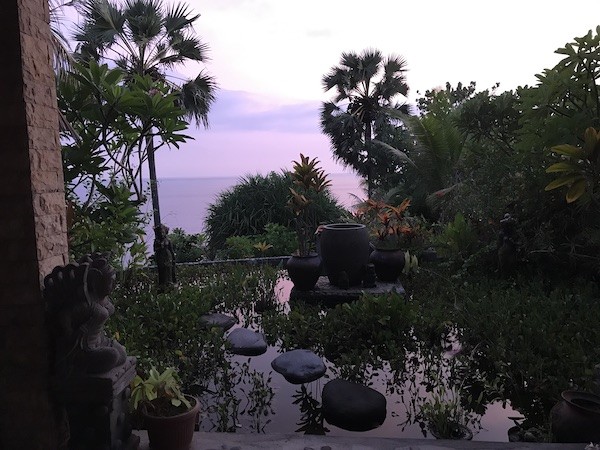 The brain using ketone bodies along with glucose for its energy, provided me with a perspective that was decidedly larger than my every day one. Clear, relaxed, observant and open to the current moment of inspiration. It was easy to stay relaxed and in the present moment, because it was simply so gorgeous and our intentions were supported.

Often I experienced remarkable waves of clarity, freedom and bliss. Gratitude and intrigue of how I got here, and what I would do with it. Also a relaxation and presence that felt so normal, though not something I’d experienced for a while.

Now, back in Australia ten days post breaking the fast, I can feel my muscle strength building back up. During and just after the fast, I felt my muscles weaken after a flight of stairs. I’ve regained around 3 of the 6 kilos I lost during the fast. The percentage of that which was digestive matter, body water, muscle and fat is not clear. Weight loss wasn’t the intention for this fast, but naturally occurs with such caloric deficit. I don’t condone such large and quick losses generally. In the case of fasting, generally the majority will return in the next few weeks. But what returns and how, will be influenced by my choices moving forward.

The importance of the reintroduction phase cannot be underestimated.

To reacquaint your digestive system with food is one aspect of breaking the fast. After days of resting the fast breaking diet needs to be simple and small, with gradual increments in complexity and size. 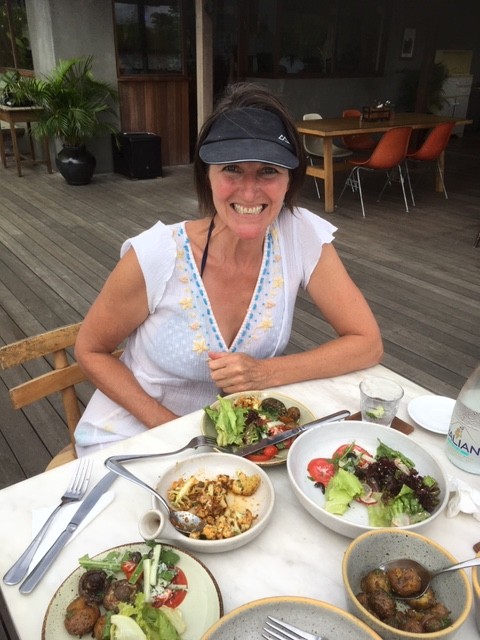 Additionally, the vacuous hunger and consumption patterns ingrained in contemporary western humanity, is a force to be reckoned with. Negotiating our ‘normal’ patterns of consumption needs tender care and spacious consideration. On reflection I would have been better spending longer at the casa during the reintroduction phase.

In the end, I had two, super delicious (smallish) meals before I left Bali. In reality though, I’d consumed so much more than a few culinary delights. I had been feasting on their ancient island ways, the natural beauty of their oceans, skies, sunrises, sunsets, flora and fauna, and their love imbued, relaxed culture the whole time.

Would you be interested in joining us for your personalised naturopathic fast in Byron Bay?

All the details are here.

Here’s Layla and I (in ketosis) breaking the fast: