The true magic of mushrooms – Feature

The more one learns about mushrooms, the more phenomenal and magical they become. Funghi are truly amazing, and potentially earth saving.

This is where we find the fungi.”

Funghi have a kingdom of their own.

Just as we belong to the animal kingdom and trees belong to the plant kingdom, mushrooms belong to the kingdom of funghi (aka fungi). Like animals, funghi breath in oxygen and release carbon dioxide. Like plants, mushrooms are stationary, rooted to and nourished by what they grow on, which is generally soil or trees, both dead and alive.

It is an amazing fact that many plants actually require on funghi to survive.

This is because particular fungal species have created a symbiotic relationship with them, living along their root systems, transforming minerals from the soil into usable nutrients and assisting with water use. Funghi are responsible for degenerating old vegetation, to create life-sustaining, fertile soil. The complexity of fungal species is actually the key to a healthy forest.

Two of the main types of funghi are those with fruiting bodies popping out of the ground, like Swiss browns or button mushrooms, and those that grow from both living and dead trees in old growth forests, called the polypores, sometimes also called bracket fungi. The vast networking, underground ‘roots’ of funghi are called mycelium. These are often only a few cells thick, and most profound in their actions. The capacity for mushrooms to randomly pop up is due to mycelium.

Internationally recognised mycologist (mushroom expert), Paul Stamets, who spoke at UPLIFT festival in Byron bay last December, made the analogy between mycelium to a tree and the mushroom’s ‘fruiting body’ to the fruit of the tree. Individual mats of mycilium can extend underground for 20,000 acres, which means funghi are in fact the biggest living organisms on earth. This underground network of mycilium also explains how a crop of mushrooms can appear, as if from nowhere.

The adaptability of funghi is astounding. Mycelium act in intelligent ways. It senses its environment and adapts to suit it. When presented with a compound it will alter its internal chemistry, to be able to use the compound as a food source or to create defences against it, if it’s a potential toxin or pathogen.

Information of these adaptations are shared throughout the mycelium network. Because mycelium are only a few cells thick, they must be resilient to environment stressors or they die. The ability to adapt and transmit messages is funghis’ way of learning. Funghi are sentient, they ‘think’, suggests Stamets. He posed the idea over a decade ago, that funghi acts as the ‘earth’s internet’, providing a bio- communication system for our planet.

Funghi’s intelligence leads to the formation of unique and powerful compounds in different species, many of which enhance human immunity.

Of course, the first antibiotic, penicillin, was produced by the blue mould Penicillium deuteromycotina.

More recently the polyphore, Turkey tail Trametes versicolour, showed very promising results in a phase 1, multiyear, clinical trial in breast cancer patients who had undergone radiation therapy. Nine grams a day of the turkey tail mushroom was effective in boosting the immune activity of Natural Killer and specific T-cells over a nine-week period. This confers greater immune defences, to clean up any viable cancer cells throughout the body after conventional treatment had diminished immune function. Turkey tail has been used for centuries, through out the world, however this US clinical trail provides the evidence Western medicine needs to include it in its cancer treatment repertoire.

In Japan, a preparation of turkey tail, called PSK, has been used successfully in integrative cancer treatments for decades. The actual active principle ingredient that stimulates this immune response has not been identified. According to Stamets, there’s an assortment of sugars (polysaccharides) and attached proteins in the funghi, but no single unique compound is responsible. PSK is attainable in Australia, though expensive and available via practitioner prescription.

Enoki is often called golden needle, and grows wild on dead conifer trees as well as easily cultivated for culinary and nutritional delights. The benefits of enoki were discovered by a Japanese epidemiologist, who recognised that cancer rates in enoki growers (also consumers) were 36-42% less than in the general population.

Author David Wolfe has been supplementing himself with two polypore funghi every day for the last decade, and suggests he hasn’t had a sick day since. He has a huge reverence for both Charga and Reishi mushrooms. Both are Northern hemisphere tree eating, funghi species, and are highly evolved to boost, what Wolfe refers to as “immunological intelligence”.

These are high in compounds called beta-glucans, which essentially stimulate nascent stem cells production and nourish the immune cells, providing them with “more tools and weaponry” to act in a sophisticated manner. The name Reishi means ‘spirit protect’ in the Chinese tradition, as it helps nourish shen, the channel of spirituality that runs through our being. Wolfe suggests these polyphores are essentially boosting ‘immunological chi’.

This kind of immunological defense is so essential at a time of increasing threats from super bugs, that have developed resistance to conventional antibiotics, and at a time when our immunological capacity is arguably depleted through pollution and poor nutrition.

Members of the funghi kingdom can help us recover from many of the pollution issues we are currently facing, and indeed provide solutions for major rehabilitation of land and water. Stamets has termed this use of funghi mycoremediation and mycofiltration. Myco is the prefix for all things fungus.

The radioactive wastes from nuclear processing of uranium, plutonium and other dense ancient elements can be reduced through funghi.

A mould was discovered growing on the damaged Chernobyl reactor. It had managed to use the radioactive waste product as a food. According to Stamets, this mould can be collected, burned in a closed incinerator, then the radioactive ash stored in a safe container to be buried for a few millennia. Unfortunately, the radioactivity of nuclear waste cannot be totally transmuted into a benign substance, however the volume of radioactive waste requiring safe storage for thousands of years, can be greatly reduced through the funghi. For example, instead of needing to store six semi trailers full of radioactive waste, the funghi can reduce it to one small container.

Mushrooms hyper-accumulate heavy metals from the air and soil.

This toxin absorption capacity is one great reason to know where your funghi come from. Or consume certified organic mushrooms.  Mycelium secrete extracellular enzymes and acids that break down plant fibers, lignin and cellulose, which are made up of long chains of carbons and hydrogens. These are structurally very similar to many hydrocarbons, the base structure common to oils, petrol products, pesticides and many other pollutants. Funghi adapt to break these down too, to use them as food. Funghi prefer to grow in acidic environments and, generally speaking, pollutants create an acidic environment. 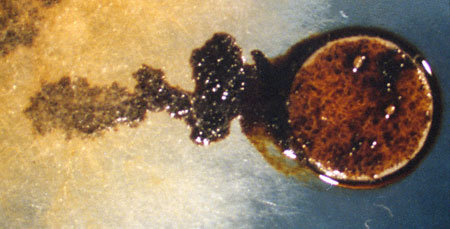 Stamets and his colleagues were invited to partake in an exercise to restore diesel contaminated soil. An experiment involving four piles of toxic dirt, were subjected to traditional bioremediation techniques (bacteria) and to inoculation with oyster mushroom mycilia. They were all covered with plastic.

After a few weeks they pulled off the covers to find the fungal inoculated pile to be full of mushrooms, and 97% less polycyclic aromatic hydrocarbons than before! The toxic matter in the mushroom piles had been reduced to non-toxic components. When the mushrooms finally died, their decaying fruiting bodies attracted flies, which laid eggs. The eggs hatched into maggots, attracting birds, who defactated on the pile dropping seeds and fertiliser to the detoxified soil.

Over time, the innoculated pile started to sprout a range of different grasses and herbs.  The other trial piles remained both polluted and baron. Not only did the mushrooms succeed in reducing the levels of toxic waste in the pile, they also were key in establishing a whole new ecosystem. Wood-decay funghi are particularly effective in breaking down petroleum products and chlorinated comounds, such as those found in pesticides.

This is tremendously promising for life on Earth.

Mushroom mycelium mats can be used as biological filter systems for polluted water ways. Oyster mushrooms in cleansing polluted water ways. Stamets and his team effectively reduced the levels of E-coli to drinkable levels.
In order to reduce the amount of toxic pesticides used in the world, Stamets has engineered a fungus that can eliminate ant infestations in houses, rather than using arsenic based, poisons. Normally, any fungal spores found on ants are stopped at the entrance to the nest, and the guard ants and the spored ant are killed. Stamets managed to create a non-sporing fungus, which overcame this surveillance, entering the ants’ nest and effectively contaminating it and growing throughout it, killing the queen and all her subjects.

These ‘mycopesticides’ are entirely non-toxic, which means there is no harmful residue lingering in the home.

At UPLIFT in 2012, Stamets, already very successful in his myco-businesses, offered the Australian patent for this non-sporing technology, as a gift to anyone who could develop and bring it to the market place.

Funghi also provide a bountiful food solution for humanity. They grow quickly and easily and replenish soils as they go. The fruiting bodies of mushrooms provide an array of excellent nutrition including macro and micronutrients. Even the conservative button mushroom offers a surprising array of minerals, vitamins and trace elements. In addition, the texture and taste of many mushrooms can be quite delightful.

Despite the vital and important roles funghi play in maintaining and evolving life on Earth, they are not taken seriously within the scientific community.
Funghi have been subject to a type of ‘scientific racism’ by the community, marginalised and not researched sufficiently.

Given the profound breadth of power mushrooms have, from immune to psychedelic, and their underworld activity, true mycophobia (fear of mushrooms) exists amongst many, according to Paul Stamets, who is in essence a crusader for funghi.

Tips to incorporate day to day for the love of funghi:

1. Get creative with your fungi consumption.

Try out new funghi types, try different recipes every week. Learn about new species of mushrooms. Expand your repertoire to shitake, maitaki, enoki as well as button, swiss browns and field mushrooms, and beyond! Safely use them as a preventative immune booster, increasing your immunological intelligence and not overstimulating delicate immune function. Eating organic mushrooms is important. That the mushrooms grow on nourished soils means they will be rich in boosting nutrients, and your dollar is promoting healthy soils.

2. Keep an eye out for funghi in your world.

See them sprouting up along your path. Take an appreciative look at the next patch of mushrooms you see. Or take it a step further and go mushrooming through forests and fields. If you are considering eating the funghi you find, ensure you correctly identify what they are before doing so. There are thousands of species of mushrooms, but only one hundred that cause symptoms when eaten by humans, and only fifteen or twenty which are potentially lethal when eaten. Many funghi live in old growth forests, so take actions to help preserve those we still have.

3. Be open to learn more about the wonder of funghi

Question and remove any biases you may have about them. Funghi provide an amazing area of solutions for the problems humanity has created. They beckon us towards a sustainable life on planet earth. Their kingdom may well save all the others!